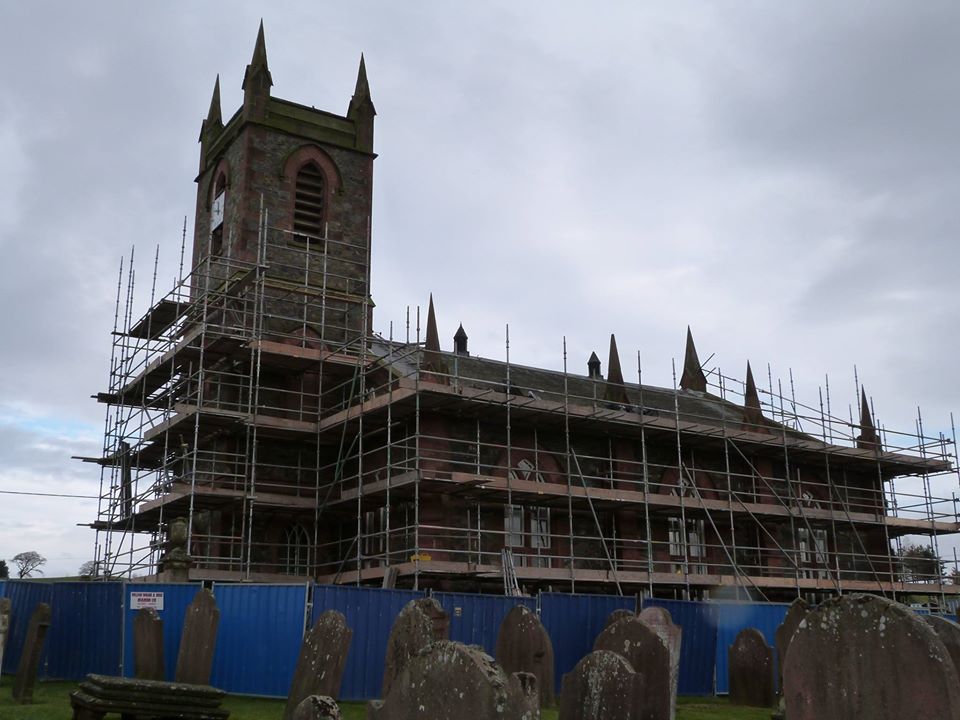 In 2015 Dunscore Parish Church commissioned a Condition Survey of the church. It indicated that there were some significant repairs needed and we decided to seek grant funding. Below is a diarised recap of the project highlights:

Colin and Jannie with the Heritage Lottery Fund award letter – they look pleased!

The first investigations are under way in the church.  A hole was opened above the pulpit to check for water damage.  Fortunately, the damage was not as great as was feared.

Historic Scotland announced today that they are to install a plaque in Dunscore Church to the memory of Jane Haining.  You can read more about this here.

We had a visit from an audio visual expert to explain and provide costs for possible display systems.

The Heritage History Group met today.  Some amazing artifacts were brought along Including a tax return during the period of window taxes.

The meeting to discuss plans to alter the interior of the church was well attended.  Rebecca Cadie made a presentation on the alternatives and there were many views expressed.

The Board met last night to consider the proposed alterations to the interior of the church.

The Heritage Project Group met today to review progress and to decide on the next steps.

While the Heritage History Group focussed on the information needed to complete the HLF documents this evening, we were fascinated by a 200 year old document relating to the Dunscore Farmers’ Society brought along by Roy.  The exhibits for the heritage centre will be fascinating.

The Heritage History Group met this evening to discuss displays in the heritage centre.  Also there were many, some very old, parish records to be examined for interesting information.

We are delighted to have received a grant from Garfield Weston Foundation!

Nicky from BDS Digital based at the Crichton Campus in Dumfries came to meet some of the project team to discuss interpretation boards, digital interaction, leaflets and more.

The tender documents for the work on the church have been prepared by our Conservation Architect. The documents have now been approved by the Heritage Lottery Fund so will be circulated to five contractors who will be asked to tender for the work. This process should be complete in approximately one month.

Members of the Heritage History Group visited Dumfries Library yesterday to find out what resources that they held there.  The group was amazed by the material available and the kindness and support on offer!  A really useful visit!

Yesterday, the Church of Scotland announced that they had discovered a box of documents and photographs relating to Jane Haining.  These include her will (handwritten in 1942), a report from the Reformed Church in Hungary about how Bishop, Laszlo Ravasz,  tried to intervene with the Hungarian authorities to try and get Jane Haining released from prison before she was moved out to Auschwitz.

In the document he remembers that she was so committed to being in Hungary that she declared that she ‘would stick to my post no matter what’,”.  She died in Auschwitz in 1944 aged 47.

You can see a report on the BBC News page here.  The Church of Scotland press release is available here.  There is a video about the discovery here.

Following the recent discovery of documents and artefacts relating to Jane Haining, Oliver Mundell MSP has lodged a motion in the Scottish Parliament recognising and praising her sacrifice.  You can read the motion here.

The heritage project group has just submitted the application to the Heritage Lottery Fund for the second round of funding. This is to carry out the repair work and internal alterations. It may take more than a month for them to consider the application. The architect has selected the preferred contractor, Wm Waugh and Sons, but we will not be in a position to agree the contract until we know if we have been successful in the application.

The Heritage History Group met this evening. There has been some fascinating investigative work.  Just a few of the items that have been discovered are shown.  The session minutes from the 1820s and 1830s are amazing with reference to taking care of a “foundling” and of a “lunatic” recently discharged from the Dumfries Asylum.  These will be displayed in the new heritage centre.

Members of the Heritage History Group were in Dumfries to meet Nicky O’Toole of BDS who will be helping us to put the heritage centre display together.  There was much to discuss and lots of material to pass to Nicky.  We are starting to get a clearer picture of how the displays may look.

A team met to clear the church today.  Anything that could be damaged by cold, damp or contractors was moved to safety.  Bags of stuff were taken to a charity shop and some thrown out.

We have had confirmation of our second round of funding from the Heritage Lottery Fund and Historic Environment Scotland.

We held a commemoration of Holocaust Memorial Day at the Jane Haining Cairn.  There were pupils present from Jane’s two schools, Dunscore Primary and Dumfries Academy.

Work to carry out the repairs to our church will be starting very soon. You will see the church being fenced off and scaffolding erected around the church building.  Work on the exterior repairs will get under way first and we anticipate that the alterations will start in late February.

Scaffolding is starting to surround the church building and repairs will follow in the near future.

There was an open day / exhibition to show the community how the work is progressing.  We had a busy day including visits from both the school and preschool.